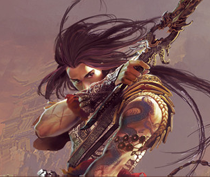 Game Background
Employment Agency
Swordsman
Gender: Male
Features: close combat, high value of life.
Brief introduction:
Swordsman is close combat career, gorgeous skilled fencing sword skill is proud of swordsman proud capital, brave and fearless is symbol of swordsmen.
In the property allocation, the property is in force of swordsman. The strength properties of high means a powerful attack force, and this is the reason that all opponents feared warrior. But because the soldiers always first rushed into the enemy camp, injured is always so agile point increase can hardly be avoided, increase the defense force, and increase the value of life is also essential strength.

magician
Gender: Male
Features: long-range attacks, spells gorgeous and varied.
Brief introduction:
The magician, as the name implies, are good at using magic to destroy the enemy. Gorgeous and varied spell is the magician mark.
In the attribute point distribution, the magician for intellectual property is. Intelligence directly determines the magician magic attack and mana, and the two in the master's damage has played a crucial role. But the magician can not wear heavy armor, so in the absence of group pre attack spells, the fragile body is the largest short board wizard.

Archer
Gender: Female
Features: remote attack, summon summon help fight, can also release auxiliary spell.
Brief introduction:
As a member of the Elven archers, with the power of nature is the innate ability. So the archer can summon powerful summon help fight, can also release increased specific spells to enhance the ability of himself and his teammates.
In some attribute, Archer points the way more diverse. Agile can provide an attack and defense force archers, seems like a good choice, but stresses the agile means gain magic and summon the power greatly diminished. But if the emphasis on intelligence, Archer itself does not have too high output. If you want to balance the two, will be because of moderation and avoid leaning to either side, the lack of highlights. Therefore, archer's attribute points what should how to allocate, the players also need to clearly want to develop the line after decide.

Welcome to come to the AMZgames platform

I'll give you a real birthday present tonight.
Learn More

The programe has been This is a warning ?
Confirm No

The programe has been successfully submitted to the system
Confirm